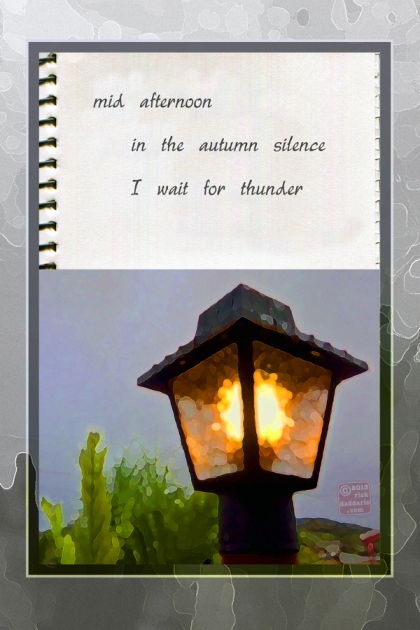 in the autumn silence

I wait for thunder

This phone-ku haiga is a modified version. The original haiku I sent with the image was too descriptive of the image (or the image was too much of an illustration of the haiku). Either way it did not work as haiga for me. This version works better (imo).

The original haiku was:

My current thinking on haiga:

In addition, both the image and the haiku of haiga should be able to stand alone, independent of each other, each remaining a strong work. Together as haiga, along with a visual balance, they should each offer something new or different to the other—a greater understanding or an alternative perspective or an intensifying of the moment possibly.

This is the ideal I work toward in my haiga. Sometimes I succeed in these things. Sometimes I do not. For me, it is way fun to try. Aloha—Rick